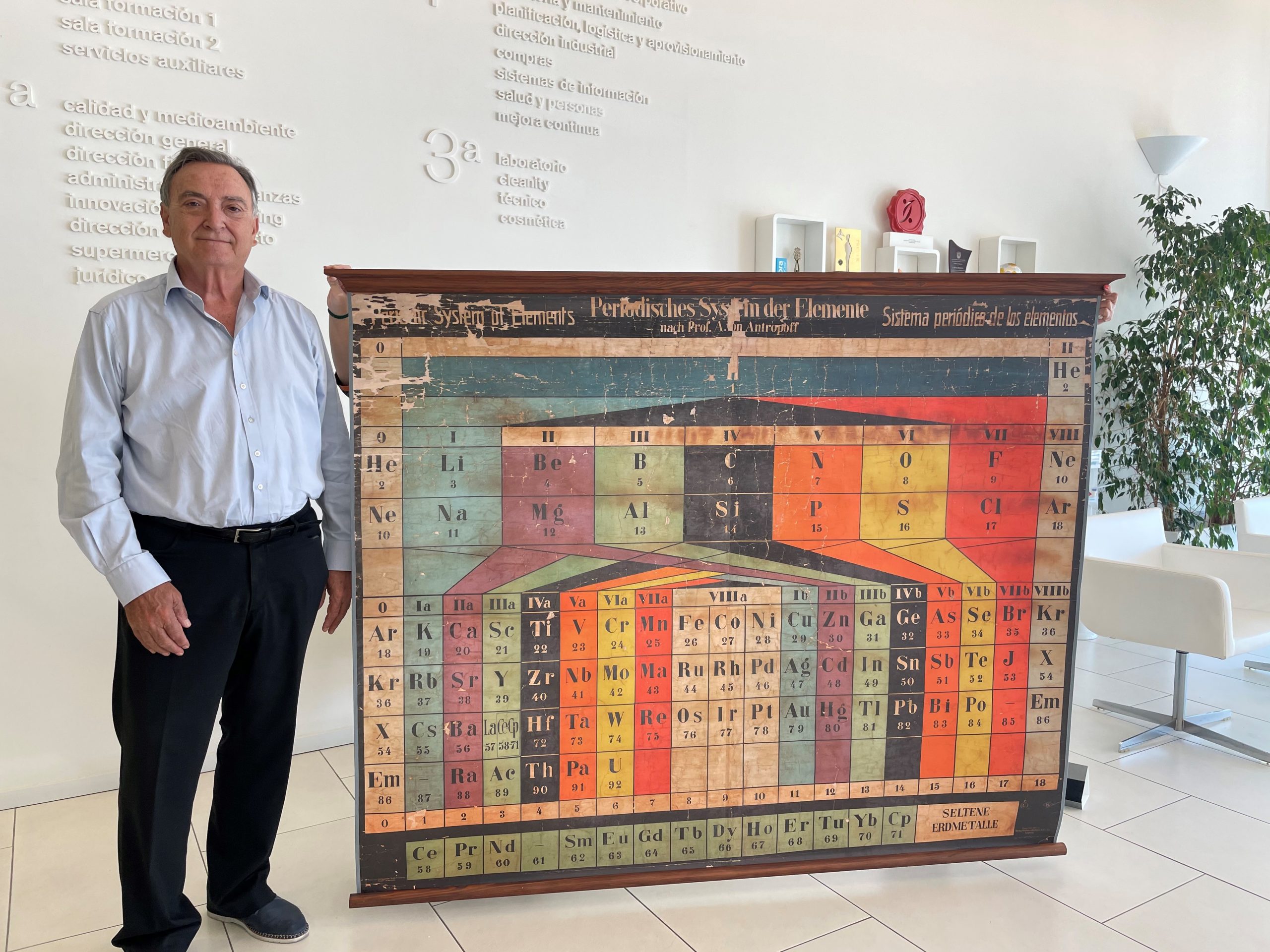 SPB restores a 1925 periodic table. SPB has made possible the restoration of a periodic table designed by Andreas von Antropoff and located in the Vicent Ferrer Secondary School in Valencia.

The restoration process of the periodic table has been completed. A work of extraordinary cultural and historical value of large dimensions, it measures exactly 1.60×1.90 m. From this restored original, which will remain in the IES Vicent Ferrer de Valencia where it was located, SPB has also made two facsimiles to scale so that the relevance of this table can be appreciated. One of the facsimiles will be exhibited at SPB and the other will be donated to the Faculty of Chemistry of the University of Valencia. These are two large reproductions in which the techniques and materials used are as close as possible to the original.

When this table, which follows the Von Antropoff model, was found, both the Faculty of Chemistry and the Institute itself mobilised to promote its recovery. Miguel Burdeos, president of SPB, from Quimacova and a chemistry graduate from the university, decided that SPB would be responsible for the work.

The panel was in a very poor state of conservation as it had suffered a strong ingress of humidity, which had mainly affected the upper part of the work. A very delicate restoration process was carried out by the company Restaura’m2 and carried out by the restorers Míriam Rodríguez and María Valero.

This restoration has a very important historical and cultural value because there are few known examples of murals that are in good condition. SPB thus manages to perpetuate this part of history and science for future generations.

The restoration of the 1925 periodic table of the IES Vicent Ferrer in Valencia. Historical perspectives.

The periodic system is one of the fundamental ingredients of contemporary chemistry. It emerged in the 1860s from two complementary lines of work: chemical classifications in natural families of elements and the study of the then called « atomic weights ».

The first line was developed mainly in the classroom and its main protagonists were secondary school and university teachers, who sought more appropriate ways to present, in a didactic way, the enormous quantity of chemical compounds known during the first half of the 19th century. Various classifications of elements, both natural and artificial, were proposed, sometimes with their corresponding graphical representations, which were used as the organisational axes of chemistry textbooks until the end of the century, even many decades after the appearance of the periodic tables.

The other line of research was related to the calculations of atomic weights based on the hypotheses introduced by John Dalton and using a large amount of empirical data and assumptions with greater or lesser certainty. The difficulty associated with these calculations, and the many uncertainties and options available, meant that there was a great variety of values for the atomic weights of the elements. The great congress in Karlsruhe addressed this issue in 1860 and some solutions were offered which led to some progress, although the problem can still be traced in many of the early periodic tables.

The periodic tables of the 1960s and 1970s combined the natural families with sequencing based on the available atomic weights. This made it possible to develop patterns for predicting new elements or modifying atomic weights. The best known table was proposed by Dmitri Ivanovich Mendeleev (1834-1907), then a chemistry professor in St. Petersburg preparing his textbook. His success was, in part, due to the subsequent discoveries of some of his predictions such as the elements germanium, scandium and gallium in the following decades. In fact, there were many other such periodic tables, reflecting the collective creativity involved in both teaching and calculations of atomic weights.

Examples are Alexandre-Emile Beguyer de Chancourtois (1820-1886), John A. Newlands (1837-1898), William Odling (1829-1921) and, most notably, Lothar Meyer (1830-1895). On the other hand, not all of Mendeleev’s predictions were confirmed, and his various versions of the periodic table failed to resolve the difficulties of incorporating new findings, such as the noble gases of the late 19th century. When he published his last version of the table in the early 20th century, Mendeleev predicted new elements (weighing less than hydrogen, for example), which were never confirmed, and he also failed to resolve serious problems related to irregularities in the atomic weight series.

In the first half of the 20th century, the periodic table underwent three major additions of both a theoretical and experimental nature: atomic numbers, radioactive elements and the interpretation provided by the new quantum mechanics. Perhaps the main novelty was the atomic number, which came about thanks to the work of Henry Moseley (1867-1919) and his studies of X-ray spectra.

Also very important was the incorporation of a large group of women who worked on the new radioactive elements in the wake of Marie Curie: the Russian chemist Julia Lermontova investigated procedures to better locate the platinum group metals (ruthenium, rhodium, palladium, osmium, iridium); the British chemist Margaret Todd suggested in 1913 the name « isotopes » (elements in the « same place » in the periodic table), responding to the new research of Frederick Soddy. Among those who made experimental advances in the description of new elements were Harriet Brooks (radon), Lise Meitner (protactinium), Ida Noddack (rhenium), Marguerite Perey (francium) and the Spaniards Carmen Brugger and Trinidad Salinas who carried out new experimental research on fluorine, atomic weights and their quantitative analysis.

All these developments can be traced back to the periodic table proposed by the chemist Andreas von Antropoff (1878-1956), a professor at the University of Bonn. His table published in 1925 incorporated ingredients from earlier ones proposed by Werner, Bohr and other authors, as was customary at the time, in accordance with the aforementioned collective creativity. Its popularity stems, on the one hand, from its mass production as a coloured wall chart for educational purposes by the Leipzig-based publisher Köhler & Volckmar, one of the most important publishers in the German context.

The table features the symbols of the elements in coloured columns and texts translated into three languages, German, English and Spanish, suggesting that it was intended for wide international circulation, as the preserved copies reveal. The other reason for the popularity of this table is its incorporation, with its corresponding modifications, in what was to become one of the most important chemistry textbooks of the second half of the 20th century: Linus Pauling’s General Chemistry.

The restored table was located at the Vicent Ferrer secondary school in Valencia, as part of the competition organised to commemorate the 150th anniversary of the periodic table. The project presented by the students of the school under the direction of the physics and chemistry teacher, Carmen Latre, won one of the prizes in the competition and made it possible to locate Antropoff’s periodic table. It presented various conservation problems that required rapid and preventive treatment.

Its restoration is thus a tribute to public education and a call for the recovery of the exceptional scientific heritage of Valencian secondary schools. It has been restored, with great care and professionalism, by the Restaura’M2 team, all thanks to the support of SPB, which has provided the necessary economic conditions for the work, and with the participation of teachers from the López Piñero Interuniversity Institute, the Museum of the History of Medicine and Science, and the Faculty of Chemistry of the University of Valencia. 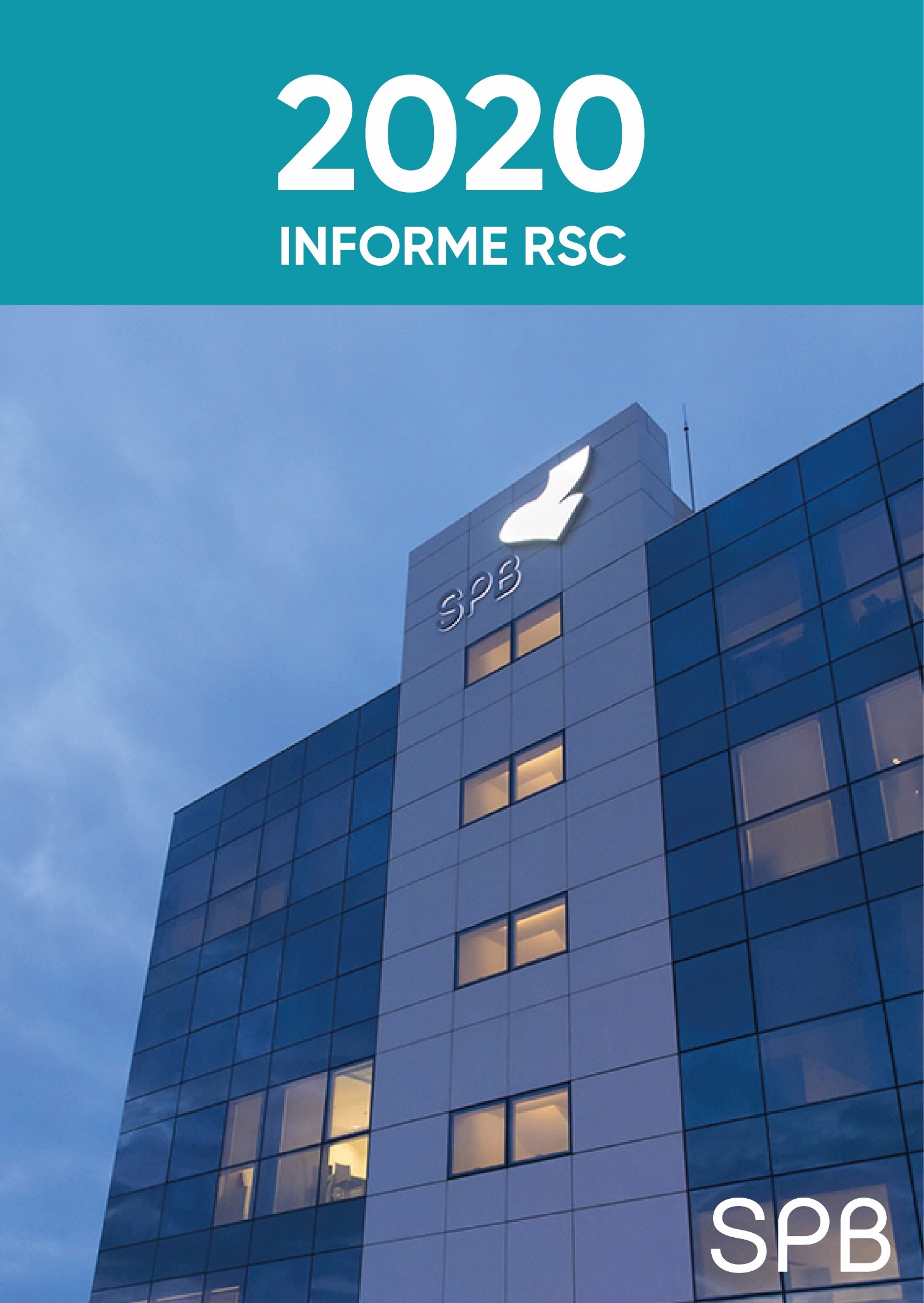 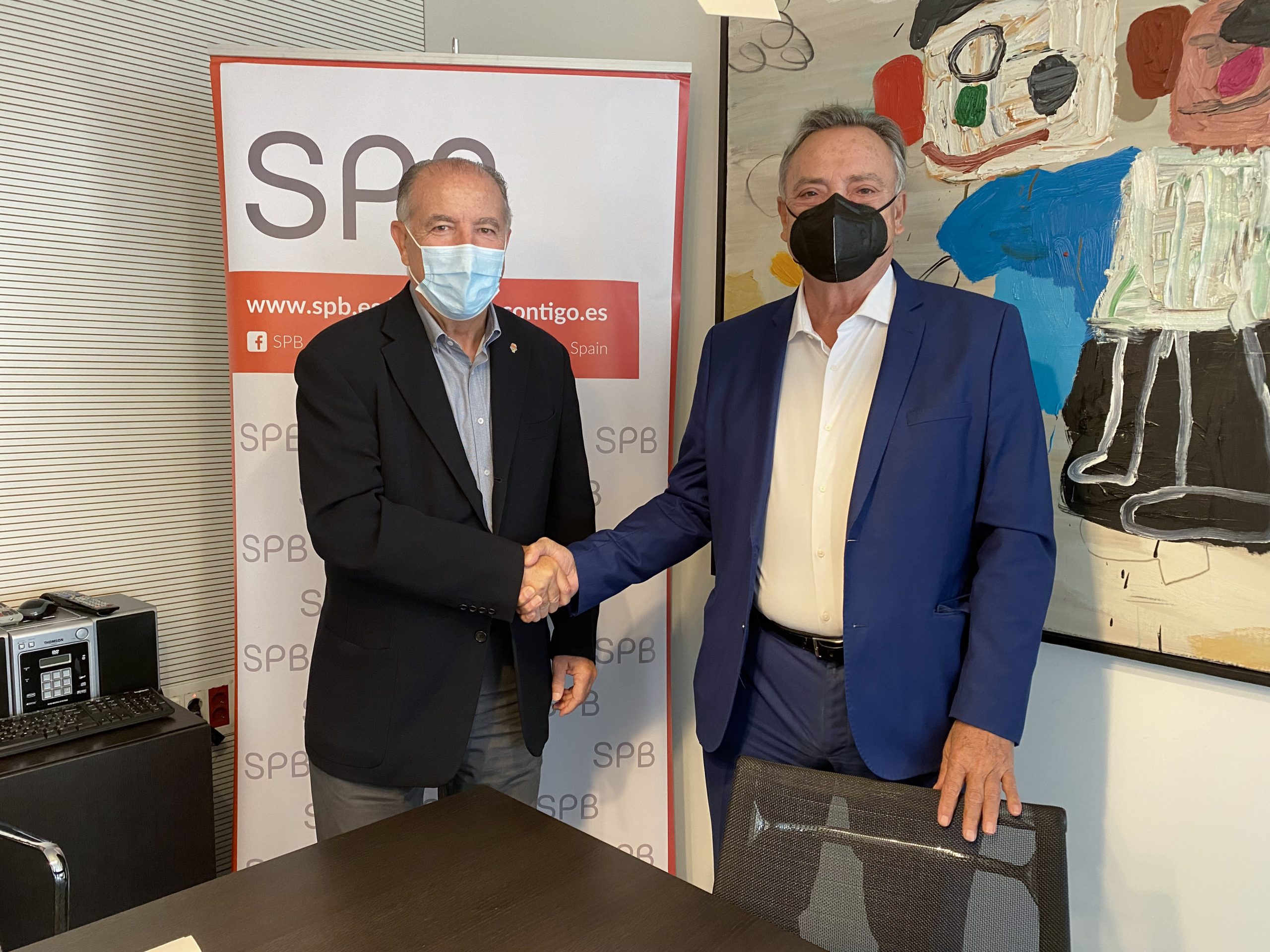 SPB RENEWS AND REACHES 25 YEARS OF COLLABORATION WITH VALENCIA BASKET 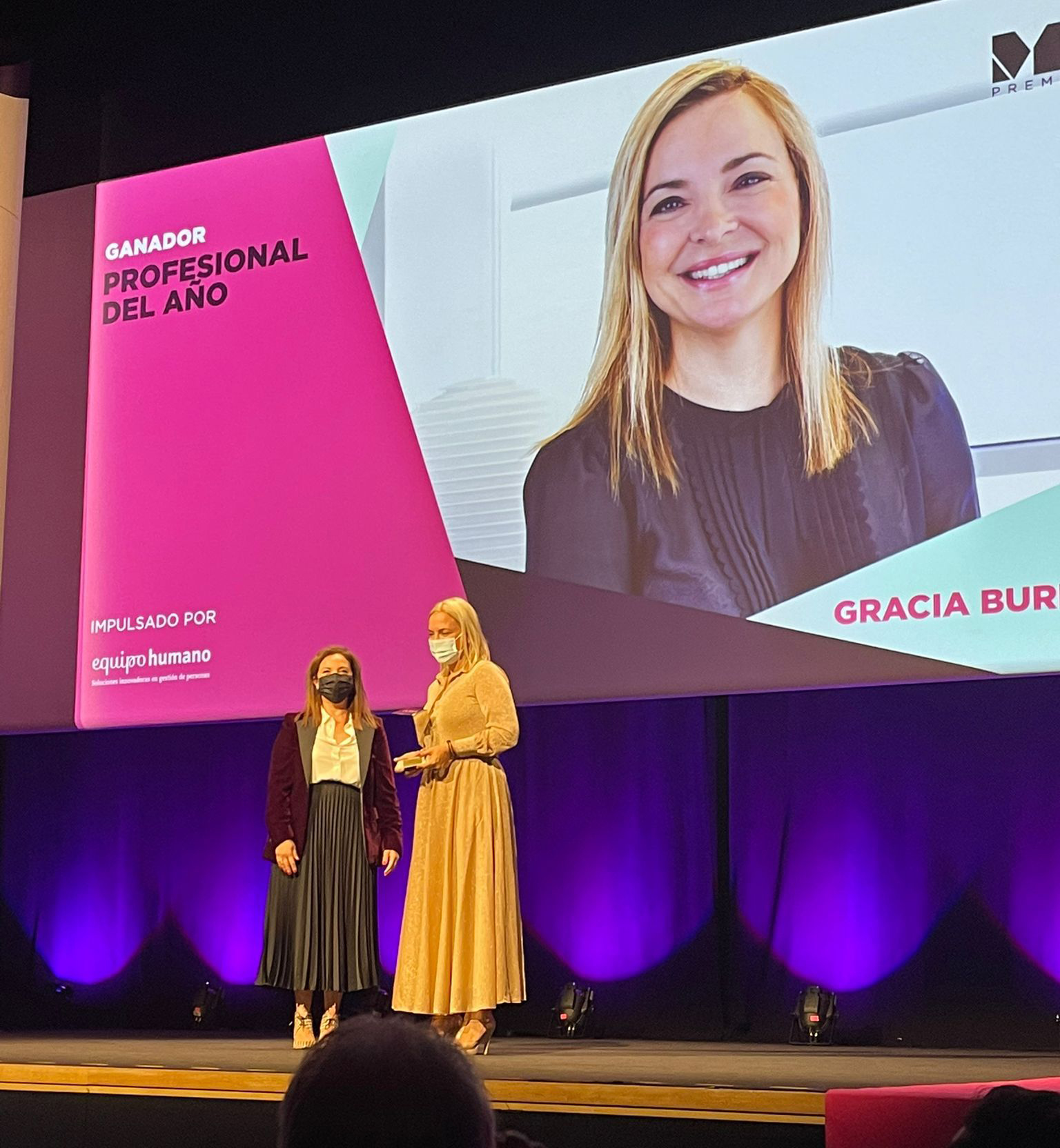 GRACIA BURDEOS, CHOSEN PROFESSIONAL OF THE YEAR BY THE MEDITERRANEAN MARKETING CLUB